A Swampy Medicine for Swampy Lungs 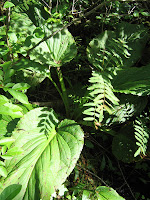 This post is part of the October Blog Party: Bio-regional herbs for the Cold and Flu Season being hosted by Rosalee de la Foret at www.methowvalleyherbs.blogspot.com

My relationship with Eastern Skunk Cabbage began with a dream about digging its roots to treat my own asthma -- a journey chronicled in an earlier post.

Recently I have been finding that many of my own experiences with the plant are consistent with the discoveries and practices of the Eclectics who knew the plant as Dracontium foetidum. (By the 1890's, most botanists were using the name by which the plant is known today, Symplocarpus foetidus, but I much prefer the older name.)

I believe Eastern Skunk Cabbage deserves a place in the Materia Medica of modern New England herbalists as an excellent ally in treating asthma and respiratory infections -- including the stubborn, lingering respiratory infections that often follow when someone does not get enough rest to fully recover from a serious bout of the flu. We have a tremendous amount to learn from earlier generations' usage of the plant.

The 1898 edition of King's American Dispensatory describes Skunk Cabbage root as "a stimulant, exerting expectorant [. . .]" Just as the plant's contractile roots reach deep into swampy soils to drink up moisture, the root as a medicine brings up excess mucous from deep in the lungs. Energetically it is neutral to warm -- well suited to treating the kind of deep, cold congestion that can set in with a stubborn lingering case of bronchitis or pneumonia.

Yet as a diaphoretic herb it can also help to release the excess heat associated with influenza and the ensuing inflammation of the lungs.

Both medicines are profoundly antispasmodic, and Skunk Cabbage is slightly narcotic, so the combination would also help to quell violent coughing fits and allow a sick person to sleep.

Skunk Cabbage root is also a nervine. King's American Dispensatory notes that "Its action upon the nervous system is marked, relieving irritation, and it has a tendency to promote normal functional activity of the nervous structures." As an asthmatic I know that the shortness of breath caused by the contraction of my airways is always compounded by the wave of panic that ensues when I can't get enough oxygen. Skunk Cabbage helps tremendously in calming that panic.

I harvest the roots Eastern Skunk Cabbage in March, when the green buds of the flowers have emerged but have not yet turned purple. There is usually still snow on the ground -- Skunk Cabbage is thermogenic and melts the ice, frost, and snow around it to become the first plant emerging in the swamp in spring. I dry the roots for a few days as a precaution because drying diminishes the levels of calcium oxalate crystals present, and then tincture them in 100 proof vodka. For acute respiratory infections I use 5-15 drops 4-6 times a day.

For bronchitis and bacterial and fungal pneumonias I usually use Skunk Cabbage along with Usnea.

For persistent, deep, cold, wet bronchitis and pneumonia I use Skunk Cabbage along with Elecampane and Pleurisy Root.

Large doses of Skunk Cabbage root may be emetic -- and in one nineteenth century formula, Skunk Cabbage was combined with Lobelia, Wild Ginger, Pleurisy Root, and Bloodroot as an "emetic for children and infants, [. . . ] safely used in croup, whooping-cough, bronchitis, asthma, convulsions, and in all cases where an emetic is required." When my asthma was at its most severe growing up, I often felt relief only when I would throw up, forcing some of the mucous from my bronchi in the process. In my own practice, I am not quite ready to revive old emetic therapies for acute bronchial and pulmonary congestion, but the idea is worth thinking about.
Posted by Sean Donahue at 1:11 PM