It began last April with a dream. In my waking life, my lungs had been congested and my neck and shoulder were sore. Before bed, I sat at my altar and burned sage and asked for a plant ally to reveal itself to me while I slept.

In the dream, Jason sat across from me in the grass on my parent's front lawn, and as we talked he told me he was having trouble breathing too. He remembered a great aunt, a Narraganset woman, who had used Skunk Cabbage as medicine.

We began drumming and singing and walked into the swamp behind the house. We came on a giant, glowing skunk cabbage plant who told us to dig up his roots and make a tincture to help our lungs and to take his leaves and make a poultice of his leaves to relieve muscle pain.

A friend confirmed that Skunk Cabbage was a medicine that could be used in those ways, but told me that by April the plant was too full of calcium oxylate for the roots to be used safely. So it would be almost a full year before the plant would begin teaching me directly . . . .

Skunk Cabbage is not a plant for the faint of heart. The leaves and flowers smell like a skunk when bruised -- perfume for those who like their pheremones strong, unbearable odor to those who prefer subtle scents. The roots need to be harvested in early spring, best dug when the flowers are still green and have yet to bloom.

A trickster, Skunk Cabbage lures you out into the swamp, ankle deep in barely melted water in places where the mud has thawed just enough to suck your feet down. The roots are notoriously hard to harvest A U.S. Forest Service website says:

Skunk Cabbage is a perennial herb that has contractile roots that contract growing down into the soil. These roots pull the stems of Skunk Cabbage deeper into the wet mucky substrates found in wet forests, swamps and along streams. Eventually the entire stem is below surface level. After several years of being pulled further into the soil it is nearly impossible to dig up.

But Symplocarpus foetidus also has a way of setting roots deep in the imagination. So when winter began to subside I let it be known that I was determined to harvest Skunk Cabbage roots this year.

My mother called me in mid-March to tell me that she had seen the first Skunk Cabbage coming up in the swamp I had visited in my dream. By the time I got there, a few days later, the flowers of the plants she had found at the edge of the woods were purple and blooming. Thinking that I had come too late, I thought about going home, but I decided to offer some tobacco to the flower and offer prayers in hopes that maybe skunk cabbage would reveal his secrets next year.

The first surprise came when I realized that the plant that had seemed so masculine in my dream was speaking to my heart in a feminine voice. She told me to go deeper into the swamp. So I walked out as far as I could, following a trail of strange purple flowers.

I came to the edge of a shallow pool, and looked up and saw two deer standing directly across the water. We watched each other for 10 minutes, and when they slowly began to walk away I followed them until I stumbled on a green skunk cabbage flower sprouting up out of the water. Wading in up to my ankles, I dug very carefully around the plant, and then reached down into the mud, cradling the plant in my hands, and pulling up slowly. To my surprise, the plant yielded itself to me. I shook loose the dirt, put it in my bag, and followed a stream flowing from the pool to find three more young plants willing to give themselves for medicine.

The Skunk Cabbage rhizome is thick and woody. The roots are tough and snakelike, pulling themselves deep into the mud. They are also powerfully thermogenic, thawing the ground around them.

Their medicine works in a similar way. The form of the roots suggests the bronchii (and the form of the round spiky green fruit suggets the alveolii -- though the fruit itself is not used medicinally). The medicine works its way deep into the lungs, bringing up mucous. The anti-spasmodic action of the plant's medicine simultaneously eases the violence of the coughing generated by the plant's expectorant properties. It works best in combination with other herbs -- elecampane suggests herself to me as a plant whose medicine complements Skunk Cabbage nicely.

As a diaphoretic, Skunk Cabbage helps to open the pores, relieving the heat of early fever -- just as heat rises outward from the plants' roots into the soil.

The shape of the flower suggests an inverted uterus hinting at the use of the roots in childbirth -- used to ease contractions. Interestingly, the Makah of the Pacific Northwest chewed on the roots of the distantly related Western Skunk Cabbage (Lysichiton americanus) to induce abortion early in a pregnancy, and the Quileute used the juice of the pounded and boiled root to ease labor. (Erna Gunther and Jeanne R. Janish. Ethnobotany of Washington. University of Washington Press, 1973,) My intuition tells me that Symplocarpus foetidus may also have abortifacient properties in early pregnancy, but that those secrets are likely to reveal themselves to an herbalist only after many years of working with the plant.

Skunk cabbage has strange and powerful medicine on a magical level as well.

The plant's energies alternate between being intensely masculine and intensely feminine -- and sometimes the plant seems to hold both energies at once. With fire rising from its body, roots deep in earth and water, and flowers and leaves giving off their musky scent, Skunk Cabbage combines the four elements of western magical traditions.

With its paradoxical nature and its dwelling place at a boundary between worlds, Skunk Cabbage as a natural ally for shamans and midwives.

The flower whispers strange names to me -- "The Faerie Shoe" that allows one bestowed with the plant's blessing to join in the dancing of the Sidhe without wearing through the soles of the dancer's feet. "Mystery Flower" -- dark and smooth inside, reaching down into moist, fertile darkness -- allowing us to hold a connection to the place from which life emerged while remaining present to the world into which it was born.

Its shape also suggests the form of the pineal gland 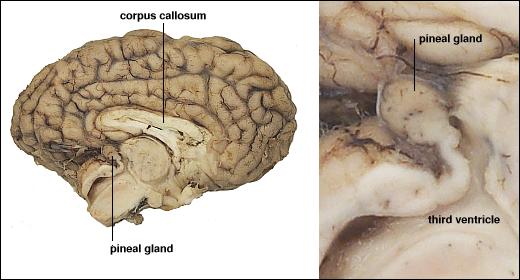 , frequently associated with the third eye. The pineal gland produces melatonin which, among other things, helps us to dream. There is a resonance here with the slight narcotic quality of the medicine of the root. Dr. Rick Strassman has theorized that at birth, at death, and at moments of extreme pleasure or pain the pineal glands also produces dimethyltryptamine (DMT), a powerful psychedellic/entheogenic compound also present in many plants (most famously in the ayahuasca vine) that seems to facilitate the spirit's journey into and out of the body. If the shape of the Skunk Cabbage flower is in fact a signature revealing the plant's affinity for the pineal gland this suggests that at a magical level, and perhaps as a flower essence, Skunk Cabbage may help to ease the transition of shamanic practitioners as they move back and forth between worlds.

The contractile roots pull skunk cabbage deeper and deeper into my consciousness -- their heat burning new pathways for mind and spirit to explore.