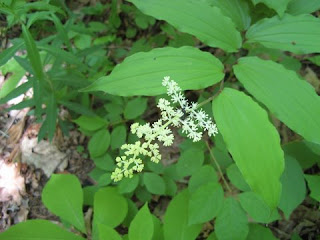 I first met Solomon's Plume (Smilacina racemosa) when I found her growing in abundance outside the van where I was living for a summer on a friend's land in central Maine.

That should have been a clue that this would be a powerful medicine for me.

But the first name I knew the plant by was "False Solomon's Seal," and I hadn't yet heard of people working with her medicine, so I dismissed her as "Not Solomon's Seal", not the medicine that had helped my knee to recover from a nasty fall the winter before.

So it caught me by surprise, when at a workshop in Vermont with Stephen Harrod Buhner, Solomon's Plume grabbed my attention and my imagination.

I saw in her form a graceful arc and then a sudden leap, bridging between worlds. I felt my chest relax and open, a cool influx of breath.

When I described what the plant showed me, Buhner told me that he found the medicine of the plant's root to be extremely useful for relaxing the connective tissues around the lungs.

Months later, when I had a chance to dig some of the roots (cutting the root several inches away from the plant to allow it to keep enough to continue growing and thriving) and tincture them, I found that my own experience matched Buhner's. I find this medicine combines particularly nicely with New England Aster (Aster Nova-angliae), a medicine which relaxes the musculature associated with the respiratory tract. The combination is great for asthmatics who are able to recognize the tightening in their chest that precedes an acute attack. (Thanks to Jim McDonald for the New England Aster part of this formula.) Its also great, in combination with breathing exercises and lung and kidney building herbs, for helping people who have developed patterns of shallow breathing from chronic respiratory disease to begin allowing themselves to breathe deeper.

The root is also profoundly cooling and demulcent -- and maintains its demulcent quality in tincture form for reasons that defy my phytochemical understanding -- and so is an excellent medicine for respiratory inflammation.

It makes a decent substitute for Solomon's Seal (Pologonatum spp.) for moistening and restoring pliability to dried out connective tissues throughout the body, particularly where there is also inflammation -- I used it with great success for a minor weight lifting injury in my right shoulder last winter.

Solomon's Plume has a strong affinity for the liver.

Matthew Wood writes that "It is restorative to the [liver's] cells or tissues and functions." And also reports that "William LeSassier said that constipation will always be present in a case requiring False Solomon's Seal. This may indicate that Smilacina improves bile secretion, hence lubrication of the stool." This may also explain its use by the Delaware and the Navajo as an emetic.

Michael Moore notes that "the root tea is also useful in frontal headaches caused by or accompanied by indigestion" -- which suggests to me that it cools liver heat.

I've had great personal success using the root tincture for constipation, indigestion, and headache associated with heat and congestion in the liver following exposure to gluten or casein.

As a liver cooling herb, Solomon's Plume also helps to cool the temper. The root smudge, which smells faintly of burnt gingerbread, was traditionally burned to soothe anger and irritability associated with PMS.

There is also a strong association of the plant with invisibility -- Solomon's Plume tends to make herself known when she wants to be seen but otherwise is often surprisingly inconspicuous for such a distinctively beautiful plant. Legend has it that Geronimo carried the root of Solomon's Plume as an invisibility charm and that it aided him in evading capture.

My own magical experience of the plant suggests an even stranger reality: The deep, cool peace of Solomon's Plume feels like it aids in slipping briefly outside ordinary space and time. Journeying with the plant, I felt myself in the center of a well-shaft that opened to distant stars, apart from a chaotic reality unfolding outside around me. I saw the face of Obatala, the Orisha associated with calm judgment who "cools the head." Perhaps Geronimo never actually became invisible, but slipped into this place instead.

This is a plant of cool, deep waters, that keeps revealing more dimensions of its medicine over time.
Posted by Sean Donahue at 4:58 PM