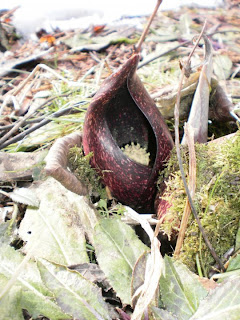 NOTE: This is a work in progress. I plan to report more fully later this fall when I've had a chance to explore the entheogenic aspects of Skunk Cabbage medicine more fully.

Also please note that fresh roots, flowers, and leaves of Eastern Skunk Cabbage should never be consumed as they contain oxalate crystals. Drying, heating, or tincturing is necessary to render the medicine safe.


A purple flower blossoms in the still-frozen swamps of New England in March.

Beneath the surface, tentacle-like roots draw down energy from the spathe at the flower’s center, melting the earth around them.If the water dries up, the roots will slowly expand and contract, moving the plant to a new location. Through this mechanism, some Eastern Skunk Cabbages (Symplocarpus foetidus) are able to survive to be 1,000 years old though swamps expand and recede around them.

Since I began working with Skunk Cabbage, I’ve understood the plant as a gatekeeper between worlds -- earth and water, above and below, conscious and unconscious, waking and dreaming.

Herbal traditions of many cultures teach that a purple flower is one sign of a plant that will shift consciousness. And the shape of the flower of the Eastern Skunk Cabbage is uncannily similar to the shape of the pineal gland, which produces the Melatonin that helps to regulate or cycles of sleep and dreaming and possibly the DMT that is implicated in the ecstatic experiences connected with childbirth, orgasm, and death.

Skunk Cabbage is also the first food eaten by black bears when they emerge from “hibernation.” Across many cultures, bears are associated with medicinal knowledge, and especially the knowledge of roots, in part because people in many places learned about root medicines by watching which plants the bears would dig. The bears’ descent underground in winter also connects them with dreams and the watery darkness of the underworld and the womb where all things sleep awaiting their birth.

Chemically, Eastern Skunk Cabbage contains 5-hydroxy-tryptamine, an analogue to one of our own neurotransmitters (Serotonin.)

At low doses, the tincture of the root induces a deep sense of stillness and calm, like the waters of a vernal pool. William Cook described it as “a simple and reliable nervine, of the most innocent and effective soothing character."

At higher doses, the tincture begins to have an entheogenic effect. The world becomes more fluid. Distinctions between thought and emotion dissolve.

Tryptamines work to reorder the ways in which we process the information we get from the world. As entheogens, both Eastern Skunk Cabbage and Western Skunk Cabbage (Lysichiton americanus) seem to work with the integration of the rational consciousness of the brain and the emotional and transpersonal consciousness of the heart. (Its not clear whether L. americanus contains tryptamines. But Stephen Harrod Buhner first observed this phenomenon with a snuff made from L. americanus roots, and I’ve observed similar effects with the tincture.)

Eastern Skunk Cabbage has a strong affinity with the lungs (contemporary and traditional use as a stimulating expectorant), the heart (traditional Menominee use for “weak heart”), and the waters that flow through our bodies (affinity for the kidneys and uterus.)

Thus, at commonly used medicinal doses, Eastern Skunk Cabbage will help to clear the physical manifestations of grief that gets buried in the lungs.

At entheogenic doses, it begins to address such grief at a soul level through reconnection to the dreaming mind of the Earth.

In both cases, the healing work is not to be undertaken lightly -- the pain released needs a container, and the journey back to the self is a journey through a world fraught with its own perils and challenges. Ecstatic methods require focus to avoid becoming purely chaotic and unleashing unintended consequences.

The journey begins with confronting our fear of seeing ourselves in the mirrors of the dark waters of the world from which the Skunk Cabbage emerges.There is a mythic resonance here with the story of the Fisher King. The Fisher King sits on a throne by the water's edge, blood pouring from a gaping wound in his thigh. And because the king is wounded the land has become barren. The wound never heals because everyone is afraid to ask the one question that would stop the bleeding and restore the king and the land to health -- “What is the source of the wound?” The answer to the question lies beneath the waters the king is afraid to dive into.

Skunk Cabbage can be a vehicle for traveling beneath the surface of the waters of consciousness, to encounter the source of the wound, and move through it and past it, undoing its power to shape consciousness and define identity. The perils lie in the potential to become so immersed in the pain and grief that the journey is never completed. But when the journey is completed, the wound is transformed from a source of pain to an opening between worlds that initiates the traveler into the compassion that comes from understanding grief and into the wellspring of healing that lies beneath the surface and comes from the heart of the universe and rises from the center of our heart from whence it flows outward, blessing and transforming all worlds.

The Jungian analyst, Robert Johnson writes that “fisher king wound is the preparation for consciousness (our modern word for shaman power) and the suffering is the training for the future healer or genius."

The mirror image of the Fisher King is the tarot’s King of Cups who has dived into the waters of the unconscious, come to terms with the darkness, and emerged transformed -- he sits on his throne holding a cup that overflows with healing water. As the bearer of the chalice he is a servant of the Great Goddess, the cup a symbol of her womb and the sacred blood of its mysteriesHaving healed his own wounds, the King of Cups has access to the power to bring the world around him back to life.For the heart that is prepared.

Skunk Cabbage can offer an opening to the realms where such transformation is possible.

So do you tincture the parts of skunk cabbage separately or do the whole plant? What proportions of alcohol to water? Thanks!

Wanted to let you know something serendipitous that I just realized. I had a strange dream event and came across your writing here.

I was driving one day and saw a skunk on the side of the road, roadkill. I didn't think much of it, but did think huh I don't see skunks often left as roadkill. Then, later that night, I had a dream where I was walking on some brownish red colored rock with all these deep dark blue pools you couldn't see into very well. They were deep and dark and mysterious. I walked along for a while and then I stopped at one of the pools and looked into it. I then saw something emerge from the depths. I looked into it's eyes and it was the eyes of the skunk that I had seen earlier. We stared deeply into each other's eyes. Then allaof the sudden, it turned into a seal and swam back into the depths.

After this dream, it felt profound. I searched the internet for "skunk" and "underworld" as I knew that water was often connected with the underworld in Mayan culture I believe, but maybe also more broadly. I came across your writing here and read it. I felt some sort of cyclical connection between your writing and my experiences.

Then, a few months later I went to the Good Medicine Confluence. I'm early on my plant path and simaltaneously have been on it my whole life. I didn't realize at the time that you had written this post. I had just seen that you were teaching a class about the underworld and wanted to talk with you about my experience. Well I think you kept saying yes later each time I saw you, but we never ended up speaking in depth ( you were on your way to classes, etc and we just never crossed paths again).

I didn't think much of any of this again until today, a friend posted a picture of skunk cabbage. I remembered this experience and wanted to read this article again. I searched it and found that, funnily enough, it was you that had written this article all along that I wanted to speak with you about.

Anyways, just a funny story I thought you'd enjoy that I honestly didn't realize how serendipitous this all was.

I have the same question, what are the proportions of alcohol to water?