Hawthorn and the Third Road 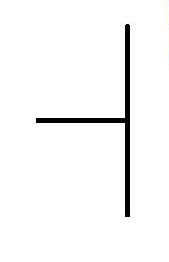 The Harvest Moon shines brightly as you wander through the mist to the Hawthorn on the ridge above the river bank.

In May her flowers seduced you with an otherworldly perfume, heavy with the scent of sex -- and death.

Now, in the last days of summer, she is heavy with fruit that bends toward the earth where it will break open and decay, leaving the seed to wait in darkness for sun and rain to return in spring.

The old stories tell us that when the world became overrun by men who wielded swords and cut the earth with iron ploughs, the people who taught our ancestors to sing the songs that called the fruit trees to blossom disappeared beneath the hills. At the gateways to their world they planted Hawthorns to tangle and repel the brutish and unwary, but nourish the hearts of those who grieved for lost worlds.

Thomas the Rhymer fell asleep beneath such a tree and woke to find the Queen of Elfland who showed him three roads he might travel -- each road corresponding to another way of being in the world:

"O see ye not that narrow road,
So thick beset with thorns and briers?
That is the path of righteousness,
Tho after it but few enquires."

The road to righteousness is the road laid out by the rules and laws of civilization -- rules that bind instinct with tangled thorns and briers that threaten to cut all who would deviate from the path. It is marked by the logical consciousness that is centered in the brain -- the consciousness that divides the world into categories that mark clear lines between what is right and true and acceptable and what is "beyond the pale." Its origins lie in the construction of the first walls that separated the city from the "wilderness" -- the name people gave to the living world around them when they began to forget they drew their life from it.

"And see not ye that braid braid road,
That lies across that lily leven?
That is the path to wickedness, Tho some call it the road to heaven."

The road of wickedness is the road of instinct uncoupled from any sense of consequence -- a sense that arose organically when people experienced themselves as inextricably woven into webs of human and ecological connection. With disconnection came alienation, and with alienation came unassuageable hunger and insatiable lust that rip and tear at the fabric of being. The road appears broad and easy because all sense of limitation is lost, it appears to lead to heaven because its the path of following unchecked desire, but it leads further and further from the source of being and life that offers the only true fulfillment of those desires.

Rather than bringing satiety, this path that disconnects us from the heart, brings agitation that can grow into panic as people desperately seek pleasure to take the edge off their feeling of emptiness, and as each moment of pleasure fades find themselves feeling the emptiness more acutely, more frantically seeking to stave off the gnawing feeling inside them. The true destination of this path is the realm of the hungry ghosts who have mouths but no stomachs and so eat and eat but are never full.

"And see not ye that bonny road,
That winds about the fernie brae?
That is the road to fair Elfland,
Where thou and I this night maun gae."

The third road -- leading from the Hawthorn -- is the path of the heart. Its a path that leads to a wilder place, a place outside all ideas and judgements of right and wrong, good and evil, a place beyond and beneath and before the stories of guilt, fear, and shame we all carry. A place of wild innocence, where you can re-member your connection to the world around you, and your desires arise from your response to its unspeakable beauty.

The Chinese traditionally taught that the heart is an earthen vessel that holds the Shen -- the individual spirit.

When the heart becomes agitated, the Shen becomes disturbed -- leading to restlessness, anxiety, and insomnia.

Hawthorn nourishes and calms the heart, helping to settle the Shen. At the same time, her thorns offer protection from those who would harm you. Calm and protected, you can breathe into the center of your chest, opening to the core of your being.

Standing in that stillness and openness, the third road opens to you -- leading you deep within where you come into contact with the part of you that remains connected with All Things and experience pure ecstasy.

Thomas followed that road and disappeared from civilization for seven years. He returned with the blessing and the curse of the "tongue that could not lie." He was no longer able to participate in the lies of politics and commerce that are necessary to operate within he framework of society. But he was also no longer able to lie to himself, no longer able to deny his own beauty and power. The luminosity of the other world shone from his eyes. Its music flowed from his lips.

Tonight the Queen of Elfland stands again beneath the Hawthorn. She points to three roads.

Which one will you choose?

Deep gratitude to Paul Bergner, Stephen Harrod Buhner, and Karina B. Heart for their teachings about the heart, which inform and infuse these words.
Posted by Sean Donahue at 7:48 PM 1 comment:

Is Herbalism in Danger of being Outlawed?

It seems like every few weeks I am reading about a law or regulatory regime that opponents fear will mean the end of herbalism as we know it.

Some of these threats have a degree of reality to them -- the "Good Manufacturing Practices" regulations, for example, have caused some small tincture makers to go out of business and created significant problems for others. (Paul Bergner has a great article giving a balanced view of these regulations in the current issue of Plant Healer Magazine.) Others are largely overblown -- I have yet to read any convincing evidence that Codex Alimentarius actually threatens anyone's attempts to sell herbal products.

What they do threaten to do is make it more difficult for companies that sell herbal products to do business. And certainly this is a real problem. I'm not in favor of any kind of government regulation of herbs prepared in traditional ways (though I would love to see supplement companies required to disclose whether they use toxic solvents in extracting plant constituents like Quercetin!) And most herb companies make a tremendous contribution to the herbal community through education, through support of conferences like the Traditions in Western Herbalism Conference and organizations like United Plant Savers, and by providing practitioners and the general public with high quality, sustainably grown and harvested herbs.

But if all the herb companies in the country were shut down by government edict tomorrow, herbalism would not die.

People would continue growing herbs in their backyards and carefully and respectfully gathering herbs from the forests, fields, mountains, deserts, and swamps around them. They would continue giving Elderberry syrup to sick children and Chaga decoctions to people with cancer. And the people in each community who devoted their lives to working with plants would continue to share their knowledge with people who wanted to learn and to help people who were sick and in pain just as they always have.

Paul Bergner points out that the jailing of herbalists like Nicholas Culpepper and Samuel Thomson failed to break their spirits or keep others from continuing their work.

And if you want to look at how successful governments have been in outlawing plants take a look at Cannabis or Poppies or Coca.

To me the core of herbalism is about helping people take their health in their own hands and connecting them with the living world around them by spreading knowledge about plants and about the workings of the human body. And the approaches to herbalism that excite me most are those that involve people working with plants that grow in their own bioregion -- something I am increasingly trying to do in my own practice, though I will likely always still work with a few beloved allies that can't grow where I live.

In this society, such ideas and practices are somewhat subversive. And I don't think we can expect a society so based on domination and control to make it easier for us to teach self reliance and mutual aid. But I also think its important to remember that no system of government, no matter how totalitarian, has ever succeeded in preventing people from healing themselves and each other with plants.

And as long as people are working with plants as medicine, herbalism will be alive and well.
Posted by Sean Donahue at 10:21 PM 1 comment: 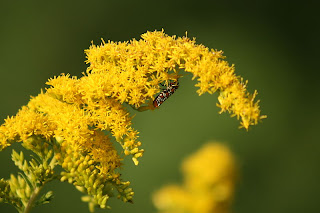 By the solar calendar, autumn is still a few weeks away. But here in Maine, summer is already fading -- there is a soft golden light as afternoon turns to evening. Everywhere, Goldenrod (Solidago spp.) blooms.

Gail Faith Edwards notes that Goldenrod is the last of the bright yellow flowers left blossoming in New England fields. Warm and aromatic, it carries the energy of these last warm days of September, and the medicine we make from it can bring sunlight into the darkness of winter, lifting the spirit.

Just as it lifts waning spirits, Goldenrod brings wonderful relief to sore, tired muscles. A massage with Goldenrod oil or a Goldenrod bath will do wonders after a hard day of working outside or a tough workout at the gym. Kiva Rose has used Goldenrod successfully for more acute muscle injuries as well.

And its warmth and astringency make it a perfect remedy for allergies marked by red, irritated eyes and a running nose that make you look and feel like you haven't slept in days,

Restoring strength when energy is flagging indeed seems to be a keynote for Goldenrod's medicine. Matthew Wood writes that:

"All summer long, while other plants are flowering, Goldenrod is steadily raising its single stalk towards the sky. Finally, around the middle of August, the golden-yellow spires appear. Both a staff and a spire are included in the picture. It is like the tarot card showing a man walking along a road with a heavy burden on his back, a walking staff in his hand. His head is bent down, so that he does not see a church spire rising in the distance which shows that the distance is within his reach. The message of Goldenrod is to endure to reach the goal."

Wood makes an interesting connection here with Goldenrod's ability to restore the kidneys' ability to pour in blood -- a necessary function for the processing of both chemical and emotional burdens in the body. When Goldenrod is called for, the kidneys themselves are tired -- often manifesting as lower back pain right around the kidneys. Wood notes that:

"In some instances, the urine is light and copious, as fluids are drawn through the kidneys, but not minerals. There may be edema of the legs. In other instances the urine is dark and concentrated"

Indeed, my first use of Goldenrod was in response to the edema that accompanied a nasty case of Poison Ivy several years ago at a point when I was also under tremendous emotional stress. My leg had swollen up under the rash. Goldenrod, in combination with a small amount of Horsetail, helped the kidneys clear the fluids.

I think of Goldenrod as bringing the last summer sun to rekindle the kidneys' fire.

It will be enough to carry us through the dark time until the sun returns.